Have you ever wanted to visit the enchanted Galapagos Islands? Well now you can and it won’t break the bank. Here is exactly what I just did, and how you can do it too.

Galápagos on a Budget — Wanderlust and Wildlife

The Guardian reports Ecuador has confirmed that a giant tortoise found in 2019 in the Galápagos Islands is a species considered extinct a century ago. The Galápagos national park is preparing an expedition to search for more of the giant tortoises in an attempt to save the species. The turtle was found two years ago on […]

A vast fishing armada off Ecuador’s biodiverse Pacific islands has stirred alarm over ‘indiscriminate’ fishing practices Jonathan Green had been tracking a whale shark named Hope across the eastern Pacific for 280 days when the satellite transmissions from a GPS tag on her dorsal fin abruptly stopped. It was not unusual for the GPS signal […] 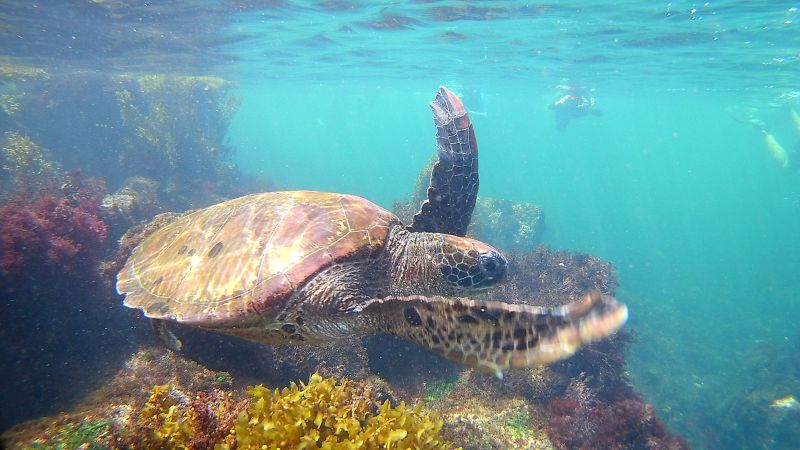 Background and Logistics A bucket list destination for many, the Galapagos Islands are a small archipelago located in the Pacific Ocean, about a six hundred miles off the coast of Ecuador. Although for most people, the major draw of the islands are the close-encounter interactions with the animals, many of which can’t be found anywhere […]

It wasn’t until recent years that the Galapagos Islands were really put on the map as a world class diving destination. Nowadays, thanks to the world renowned and the very popular BBC series of ‘Blue Planet’ and later ‘Galapagos‘, awareness and appreciation of this archipelago was delivered to the masses. Ever since listening to Sir […]

The BBC reports A giant tortoise whose legendary libido has been credited with saving his species from extinction is to return to the wild on the Galápagos Islands. Diego was among 14 male tortoises selected to take part in a breeding programme on Santa Cruz Island. The programme has been a success, producing more than 2,000 […]

No trip to the Galápagos Islands is complete without exploring the diversity of marine life below the surface. Most people don’t realize that you will be snorkeling at least once a day when you are traveling via cruise, so make sure that you practice the basics and feel comfortable snorkeling if this is a new […]

Ecuador is mentioned in the title but is not the only country where deforestation is putting at risk the survival of one of the big predator species in the hemisphere. Thanks to Kimberley Brown, writing in the Guardian, for her reporting from our neighborhood to the south on one of the animals we have featured […]

THIS IS THE COUNTRY THAT ADMINISTERS GALAPAGOS, ALSO.

With all the magnificent sights on the shores of the Galapagos Islands, crabs are not usually the first creature our eyes behold. But the Galapagos crabs, like other crab species, are fascinating. The two species we saw most were the Sally Lightfoot and hermit crabs. Sally Lightfoot Crabs are most […]