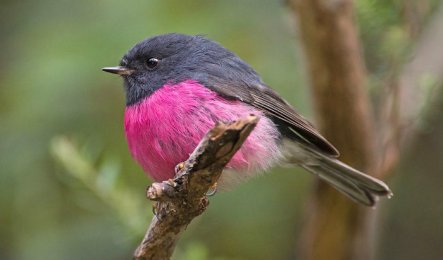 IF YOU’RE A WINTER baby like me, you probably feel like you were born in the wrong hemisphere, especially around Christmas time.

While everyone else is looking forward to a December filled with seafood, salads, and sun-baking, all I can think about is huge roast dinners, mulled beverages, and greeting cards illustrated with fat little Christmas robins all puffed up against a background of snow and pine needles.

But while the northern hemisphere might have some very pretty red robins, Australia has something that I think is even better – pink robins.

Endemic to the dense, temperate and tropical forests of southeastern Australia, the pink robin (Petroica rodinogaster) is a plump little bird that weighs just 10g.